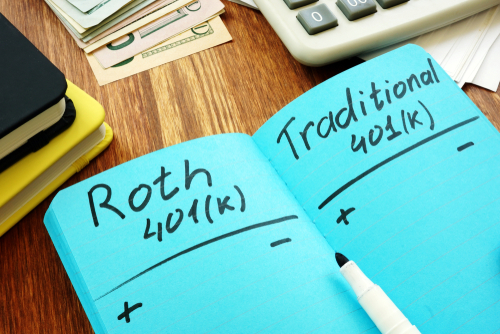 Consider switching to a Roth 401(k) instead of a standard 401(k) if your income falls in a lower tax bracket.

If your marginal tax rate is now lower than it will be in retirement, it makes financial sense to make Roth contributions. This is generally the case for workers in their early careers on minimum wage. This may be especially true for a middle-aged worker who has been unemployed for an extended period or has taken a reduced position, such as teaching. Or maybe a retired CEO who wants to work part-time.

Contributing to a Roth 401(k) at a low tax rate is a good idea for all of these persons. If you have a standard 401(k), your contributions are deducted before taxes, and your withdrawals will be subject to income tax. This is a great bargain for employees who are in a higher tax band now than they will be in retirement.

Contributions to a Roth 401(k) are made using after-tax monies, but withdrawals in retirement are not taxed. This is a terrific bargain for those whose effective tax rate in retirement will be greater than their present rate.

It is impossible to predict what tax rates will be in the future. However, most professionals anticipate that the budget deficit will increase from its current levels.

According to Kelly Wright, director of financial planning at Verdence Capital Advisors, Roth IRAs are a good idea for younger individuals in the 24% tax rate or below who are on a career path that might swiftly move them into higher tax brackets.

However, according to Jim Colavita, a wealth management adviser at GenTrust Money Management, workers who have amassed most of their wealth in tax-deferred accounts may face greater taxes when they begin receiving required minimum distributions at age 72.

He has heard that people in their retirement years, because of RMDs, enjoy some of their finest years ever, earning-wise. Conventional 401(k) plans were formerly the sole option provided by most companies. Many companies provide employees an option between standard and Roth 401(k) plans.

When you open a Roth IRA, you’re essentially enrolling in a savings program that requires you to do so. By putting in the maximum pretax amount of $22,500 to a regular 401(k) in 2023, the government will have a claim on a portion of your retirement savings and will expect its share in taxes when you withdraw the funds. The $22,500 you put into a Roth IRA after taxes is yours, even if you’ll have less disposable income now because of the higher tax rate.

Two basic conditions must be met to receive tax-free withdrawals from a Roth IRA. Profits can be withdrawn once the account has been open for five years, and the owner must be at least 59.5 years old (contributions can be removed at any time).

Withdrawing Roth funds before age 59.5 is permitted in certain circumstances. To avoid paying taxes or penalties on profits, using a Roth IRA to pay for a first home purchase is considered a qualified distribution.

The Roth IRA is a terrific way to save money tax-free, so most employees will want to let their money grow in it for as long as possible. If neither they nor their spouses utilize Roth’s funds during their lifetimes, the account can grow tax-free for another decade before being distributed to the beneficiaries.

Whether or not a Roth makes sense depends on the worker’s current and expected federal tax brackets. Wright advises savers to compare the tax rates of the standard 401(k) and the Roth 401(k) to determine which option would yield a greater after-tax return. Wright argues that employees who allow their workers to split between both a Roth and a standard IRA can benefit from investing in both.

Since Wright anticipates a lower tax rate this year compared to 2023, he is allocating his 401(k) contributions between the Roth and regular plans. This is his final year of tax-deductible alimony payments, and he took some time off this year before commencing his position at Verdence.