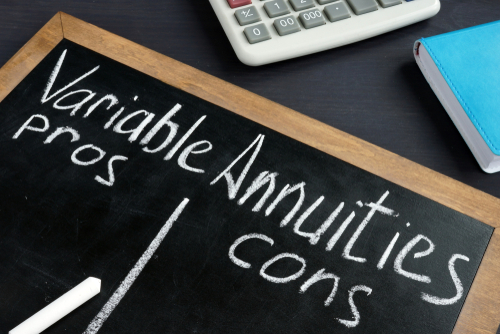 During your early life, you probably rode the ebb and flow of the market, hoping to hit that investment “home run.” And why not? Even though you suffered losses from time to time, you were confident that you would bounce back, and you knew you had plenty of time to recover before retirement.

As time passes, investing approaches change. Retirement is when most people think about protecting and preserving their assets, not making big market moves.

Today, the return of your principal is more important than the return on your principal, which is undoubtedly true for most people. The variable annuities some retirees rely on for a regular income may not be the best option for them.

Your money may not be safe.

Brokers often lead clients to believe that variable annuities are safe, which is not the case. Your principal is not protected when your money is invested in mutual funds.

“Variable” is the name of the annuity, meaning the principal varies, as opposed to a fixed annuity, where the principal is guaranteed and backed by the insurance company’s financial strength. The performance of mutual funds determines the cash value of a variable annuity, so it generally depends on market fluctuations.

Get the cash value of your variable annuity from your insurance company’s customer service representative on October 12, 2007, and March 6, 2009. The top-to-bottom market value is shown here. By then, you will know what you lost during the last major crash and how much it has grown since March 2009. Hopefully, you are far ahead of where you were in 2007 before the last crash or at least broken even at this point.

What if you had purchased your variable annuity after 2009 and enjoyed the bull market for over a decade? Ask your insurance company what the value of your annuity was on February 19, 2020, and again on March 23, 2020. It will be possible for you to see how much your principal was lost in the six-week COVID crash, which should give you an idea of how much your principal is at risk.

If your goals and needs have changed and you are more concerned with keeping your fees low and preserving your wealth, then it may be time to adjust your retirement strategy to meet your needs and goals.

Variable annuities come with a number of fees.

The hidden fees of variable annuities can eat away at your investment performance and leave nothing for your beneficiaries. There are typically up to five different fees associated with variable annuities! For more information about your specific fees, call your variable annuity customer service line:

Your income rider value is not your cash value.

Brokers often tell their clients that money in a variable annuity is safe and cannot be lost. It’s not true since your variable annuity’s cash value fluctuates based on the mutual funds you invest in, minus the potentially high annual fees.

Generally, your broker is referring to an added income rider, which can grow at 6% per year. Many believe they are earning 6% of their money and will be able to walk away with this lump sum growth of 6% in the future. It couldn’t be further from the truth. To be able to pay you 6%, the broker a commission, and still make a profit, the insurance company would have to earn approximately 9% a year to pay you 6%. Since insurance companies must invest mainly in corporate bonds, they typically make closer to 5% per year. Therefore, they cannot pay you 6% and still have a profitable product.

This means that only your income rider is growing at 6% per year, and if you want to walk away with a lump sum in the future, you won’t get the 6% growth income rider value. Instead, you will receive your cash accumulation value, less the annual fees you paid each year, based on your mutual fund results.

The 6% rider says that you will be able to turn on a guaranteed pension for life sometime in the future, even if you outlive your money. That sounds good, but it is not exactly what it sounds like.

An income rider is not an efficient way to receive income for life.

Here’s an example of how an income rider works. A variable annuity bought at 65 for $1 million may pay 5% per year for life, or $50,000 per year for as long as you live, starting immediately.

If you run out of money in the account, the insurance company will still pay you $50,000 annually for the rest of your life. Unfortunately, the $50,000 they give you comes from your own $1 million, and you are getting your own money back!

Morningstar recently lowered its withdrawal rule from 4% to 3.3%. To preserve your retirement nest egg, you should withdraw about 3.3% of it each year. Undoubtedly, taking 9% out of a volatile asset like a variable annuity will be difficult going forward.

The Potential of your lifetime income increasing is tied to the market.

It is possible that your income could increase after you turn it on, according to your adviser. If you had bought a variable annuity in 1995 and immediately turned on your income, your income would have increased during the incredible bull market from 1995 to 2001.

However, you can only increase your income payout if the market consistently earns more than the 9% you withdraw each year in income and fees. There is a possibility that you can make more than 9% year after year in the market without having a losing year. Still, starting in mid-2022, it is unlikely that you will be able to consistently earn over 9% without experiencing a down year starting from where we are in the stock market.

Since you can’t expect to earn significantly more than 9% year after year, it’s more likely that there will be no inflation increase in future payouts. In 10 or 20 years, what will $50,000 buy? The principal you withdraw from a variable annuity over 20 years cannot be reinvested in the future because it has been withdrawn.

Your family is not granted a death benefit.

Death benefit riders are common, and many believe their families will always receive a lump sum upon death. However, this isn’t always the case.

As discussed above, you may run out of money at some point during your lifetime if you withdraw 9% from your variable annuity each year. When you run out of money in your contract, the insurance company will annuitize the income rider, which means your family won’t receive a lump sum death benefit when you die.

Common sense dictates this. Suppose no money is left in your account. In that case, the insurance company can’t afford to pay you $50,000 annually for the rest of your life and give your entire $1 million to your beneficiaries.

To preserve their family’s lump sum death benefit, some brokers have advised clients to stop taking the $50,000 yearly income when the account reaches $1,000 in cash value. In that case, the fees would still be $20,000 per year. The insurance company charges their rider fees based on the income rider value and the death benefit rider value, which might still be $1 million!

After years of hard work, retirement is the time to reap the benefits. In retirement, if you aren’t careful, you can quickly deplete your savings if you take significant risks. A variable annuity has more risk than you think.