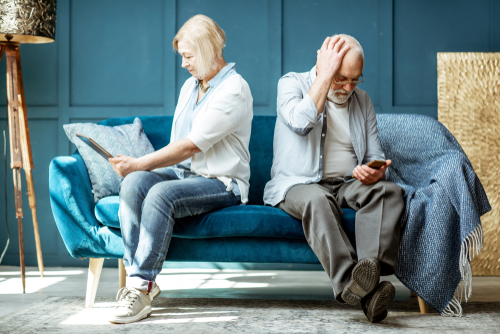 Over the past two decades, divorce rates for people over 50 have more than doubled. Divorcing later can significantly impact your financial security. Indeed, divorce can potentially halve your assets while tripling your expenses, which can be especially damaging if you don’t have decades to recover. Bob Barth, a Schwab wealth strategist in Orlando, Florida, says most of a couple’s wealth comes from assets acquired together over the years.

The distribution of those assets varies greatly depending on where you live. All earnings and everything acquired with those earnings are divided 50/50 in states such as Arizona, California, Idaho, Louisiana, Nevada, New Mexico, Texas, Washington, and Wisconsin. In common law states, however, marital assets should be divided “equitably,” a standard that allows courts considerable leeway in determining what’s fair.

Even assets thought to be separate, such as certain types of inheritances, may factor into how a court decides who gets what. Bob says you’ll need the assistance of your financial advisor, an accountant, and a lawyer familiar with state-specific rules. Divorce is complicated, and you can take many different approaches. Furthermore, these legal rules are constantly evolving.

Because of their size and how soon you’re likely to need them, retirement savings sources can loom especially large for older couples. Furthermore, such assets are frequently governed by their own rules regarding how they can be divided. Let’s examine three essential assets for post-retirement divorces.

According to the law, 401(k)s and individual retirement accounts (IRAs) can only have one account holder. During a marriage, however, both parties own the money that goes into such an account. It may be necessary to transfer funds from the spouse with the higher balance to the spouse with the lower balance as part of the divorce settlement.

401(k) funds require both spouses to file a qualified domestic relations order (QDRO) with a state-level domestic-relations court outlining how the money should be divided. Each spouse should keep the following three points in mind:

QDROs do not apply to IRA assets. However, the most tax-efficient method, a direct rollover from one spouse’s IRA to another spouse’s IRA, can occur only if specified in the divorce settlement and filed with the plan custodian.

Account holders who are concerned about jeopardizing their retirement savings may be able to relinquish other assets, such as a more significant stake in the equity of a home or the contents of an investment account, to satisfy their financial obligations to the other spouse. In either case, states are vested in ensuring that no one emerges from a divorce with undue financial strain, Bob says. As a result, when a married couple has successfully saved for retirement, those funds are typically invested to ensure both parties are financially secure.

A defined-benefit pension earned by one spouse during the marriage is also considered a shared asset by the court. This has the potential to become an emotional issue, Bob warns. If one spouse has worked hard to earn a pension, he or she may feel entitled to it.

An eligible spouse would only be entitled to the portion of the pension earned during the marriage. Divvying pension assets over retirement accounts can be complicated by pension plan rules, state laws, and whether or not a spouse has already begun receiving payments.

If only one spouse has a pension, they may prefer to bargain over other assets of equal value rather than the pension itself. Suppose both spouses have pensions, but their values are unequal. Rather than forfeiting a portion of their pension, the spouse with the larger pension may purchase a single premium life insurance policy and name their former spouse as the beneficiary.

In both cases, you’re substituting something of equal value for the amount your ex would have received from your pension, Bob explains.

Unlike retirement accounts and pensions, which are often subject to wrangling and compromise, the handling of Social Security benefits in divorce is governed by law and is rarely open to interpretation. The Social Security benefit is what it is, but keep in mind that it may become part of the larger debate over who gets what, which can be contentious in and of itself, Bob says.

In the case of a marriage lasting at least ten years before the divorce, the ex-spouse might apply for monthly benefits equal to up to half of the higher earner’s full retirement age benefit. (However, if the lower earner remarries, they forfeit any claim to such benefits in most cases.)

When your divorce is finalized, you should consider how your new situation will affect your current and future finances. To that end, review your financial plan to ensure you’re still on track to meet your objectives. You should also revise your will and account beneficiaries to reflect your new circumstances.

Make sure you update your beneficiary designations, especially once your divorce is finalized, Bob advises. If you don’t, you risk giving your ex additional assets because some states don’t automatically nullify such designations after divorce.

The truth is that most people do not plan for divorce, especially when they are older. Before, during, and after your divorce, both parties can benefit from working with a financial advisor. If you’re facing divorce and retirement, you can take concrete steps to limit the damage.